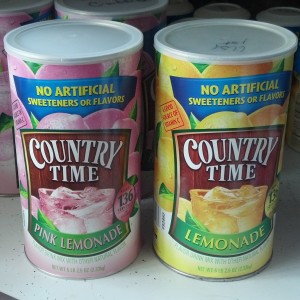 This goes in the same category of weird as Burger King’s pickles have soy in them.

I would have never thought to check a powdered drink mix for soy.

It just so happened that I was asked to take two cans of Country Time Lemonade drink mix to our church’s kitchen for vacation bible school this week. It was a long walk to the kitchen and my ADD tendencies kicked in, so out of boredom, I started reading the label — and there it was: Soy lecethin! In a powdered drink mix? That can’t be right. We’ve never had a problem with Kool-Aid and other powered mixes, so I would have just skipped right over it.

It just shows that you can never assume anything when it comes to the food industry’s creative insertion of soy in our diets.

As a continuation of this saga, we headed off to the local dollar store grab some drinks for our kids during VBS this week.  I was stunned by how many of the kids drinks had artificial sweeteners in them like sucralose and aspartame. I was standing there with a box of (soy free) little hugs that were advertised as 75% less sugar, when I saw sucralose (Splenda) in the ingredient list — hardly fits my definition of “less sugar”. 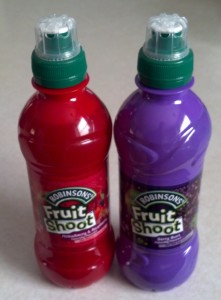 Does not contain soy

For anybody else out there looking for soy free, artificial sweetener free, and high fructose corn syrup free drink for your kids, I’m happy to say I found Robinson’s Fruit Shoot in Berry Burst and Strawberry & Raspberry.

Be wary of of the Green Apple Fruit Shoot, as it says “No added sugar”, but it contains sucralose. Off to VBS armed with our emergency backup beverages!